Trouble in Texas: Church in Peril or Germination?

1. Bishop was first one elected in 2008 and assigned to the North Texas Conference. He originally came from the Texas Annual Conference where he was a District Superintendant.
2. Four years later, North Texas Annual Conference was doing well numerically (rises in professions of faith and worship attendance) but lots of clergy discontent regarding lack of leadership presence, cronyism, and some mishandlings of large-church appointments. Bishop does poorly on his evaluations so the Jurisdictional Episcopal Committee (JEC) calls him forth.
3. JEC offers Bledsoe to voluntarily retire or else they will involuntarily remove him due to effectiveness. He agrees to retire, but then at Annual Conference he decides not to retire and will fight to keep his position.
4. South Central Jurisdiction (SCJ) meets in Oklahoma City and the JEC votes to involuntarily retire him. The gathered SCJ affirms the vote by a 3:1 margin. Bledsoe is involuntarily retired, and that leaves an open Bishop's seat in Southwest Texas/New Mexico conference. Two retired bishops chosen by the Council of Bishops to share the responsibilities until 2016.
5. Bledsoe appeals the decision to Judicial Council, and they just ruled that due process was not followed (still reading exactly what that was) and that regardless of whatever private evidence they had, the process was not followed so Bledsoe is to be immediately appointed (which means 99% likely the South West Texas /New Mexico conference).
6. Options now are that the Jurisdictional Episcopal Committee can follow the private process and try again, bring Bledsoe up on charges and have a public trial, or give up and let the Bishop serve a conference until the next South Central Jurisdictional Conference in 2016.
7. Basically, a mess.

I read the entire decision, which was posted here. Judicial Council's ruling was based on two things: a) due process was not followed; b) the South Central Jurisdiction removed a bishop based on "effectiveness" without developing an understanding of what "effective" means or any objective measures of effectiveness. I believe it is the second objection that is most important. I believe the most significant paragraph of the decision is this:

"A review of the transcript of the hearing did not reveal any standard of “best interest” that questioners were lifting up to the bishop. There was no discussion of church growth, worship attendance or numbers of profession of faith. There did not seem to be any place where “best interest” standards were articulated nor was there a statement presented that held up a vision or goals for ministry against which all bishops would be held accountable, let alone in this instant situation."This paragraph confirms what I've been saying for a long time: if we cannot, as a church, develop a definition of "effectiveness" and objective measures by which we gauge it, we cannot apply it to clergy evaluation. To do so leads to mayhem, which we are now seeing. Apparently this mayhem is not new. The United Methodist Interpreter reports: "the Judicial Council underscored what many rank-and-file United Methodist clergy have experienced for years: the denomination has no truly fair, objective and transparent process for evaluating the performance of its ordained ministers."

Perhaps it's cynical of me, but I think one of the reasons we have avoided defining the term "effectiveness" is that it's a byword of the latest church fad (church metrics). Once you scratch the surface, it really means very little, as did "servant leadership", "relevance", and "passionate worship" before it. We absolutely must examine our methodology for renewing the church before we enact it, and examine the rhetoric of that method, before we actually enact it.

While the Interpreter article referenced above views the removal of the bishop as the right thing to do, and the JC as an impediment to doing the right thing, I believe that this entire saga illustrates the exact opposite. If we fail to define, as a Church, what we expect of our pastors, the task of holding them accountable can easily become arbitrary and random. While the Interpreter writer suggests that we must throw out the entire Book of Discipline, I am grateful that it prevented our denomination from wounding one of our own by ruining his career and reputation without a well-documented reason. That would have undermined our integrity as a denomination and credibility as Christians.

The answer to our "problems" (if that is what we want to call them) as a Church is not throwing out any pastor who doesn't hit the numbers we want. The answer is engaging in mission and recovering our prophetic voice in this culture. Adopting the latest ideas from the corporate world will not "save our church." Being authentically Christian will.
Posted by Carolyn Frantz at 10:05 PM 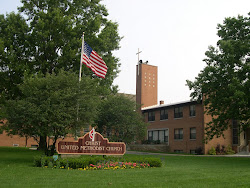